In our constant search for top-quality Abruzzo wines available outside of Italy, we recently visited the Pescara province’s Azienda Vinicola Talamonti, set within the ‘Golden Triangle’ of Abruzzo (created by Loreto Aprutino, Moscufo & Pianella, an area primarily famous for its olive oil). This was one of those Abruzzo days when the sky was marvelous & faintly oppressive at the same time, which lent a slight vulnerability to the externally small building housing the admin and processing area. We were greeted by the hugely personable Rodrigo Redmont, a fluent English speaker (thankfully!) and Sales Director for the estate. A quick blitz through the office where we were quickly introduced to the ever-busy Antonella Di Tonno, daughter of the man responsible for the estate as it is today, Alfredo Di Tonno; this was followed by a chat about the vineyard-estate’s formation, before a tour of the vineyards themselves. The Talamonti vineyard-estate comprises 32 hectares dedicated to the production of classic Abruzzo grapes, Trebbiano d’Abruzzo, Montepulciano d’Abruzzo & Pecorino, as well as Merlot grapes currently used in a blend for their Kudos wine with the Montepulciano.  The vineyards that now provide Talamonti’s grapes were previously part of an ambitious co-operative project undertaken by 18 or so Italian business men, mostly with some connection to Abruzzo. Not surprisingly perhaps, as time passed this number dwindled with people losing interest or lacking the patience such a business requires, until in 2001 only a hard-core was left, namely the Di Tonno family. Since then the family, convinced of the merits and potential of the estate, have dedicated themselves vigorously to developing the business, both in terms of their products’ quality & quantity and the brand.

Talamonti’s vineyards mostly benefit from a favourable south-easterly exposure, and from the micro-climate and terrior that typifies the area along the Tavo Valley, making it one of the most popular areas in Abruzzo for making wine. The vineyards roll down onto the cantina, where the wine is processed and where our tour continued. Rows of modern metal fermentation vats in decreasing sizes fills the first half of the processing area, with a comparably humble in-house bottling & labling area below that leading up to the loading area for collection & despatch. The vineyard also utilises a surprisingly international selection of oak for its barrels, providing a variety in the seasoning and toasture, apparently.

During a lunch with Signor Redmont we sampled some of the Tre Saggi, a 100% Montepulciano wine that is Talamonti’s flagship red; a powerful, darkly complex berry flavour, this wine needs to accompany strong rich flavours, such as red meat or potent cheese, otherwise could easily overwhelm everything else. The name refers to the Three Wise Men, and was chosen due to a fresco in a nearby church. Notably this wine is perfect for aging, with 8-10 years considered acceptable. 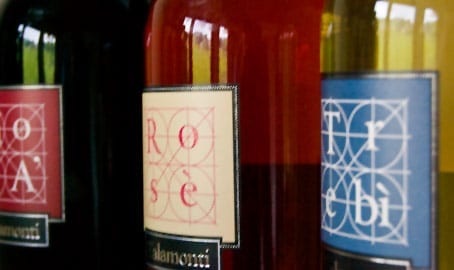 At home and with family or friends we have sampled a variety of wines from the vineyard. Their cerasuolo, Rosè, had a light but vaguely spicy nose, with raspberries and the familiar (for cerasuolo) toffee flavours; this one divided our group of samplers, some finding it a bit too light & smooth, but interestingly those of a slightly older generation rhapsodising on its perfectness for a summer day!

The Montepulciano/Merlot blend Talamonti creates for their Kudos is as the name suggests worthy of praise; a more fruity flavour with less of the darkness of the Tre Saggi, tanniny and with a long finish, hints of coffee (or chocolate?).

The other we feel we should particularly mention here, not least as it is a grape variety one of our reviewers is particularly enamored with when done well, was the Pecorino wine, Trabochetto (named after the fishing platforms, trabocchi, on the Abruzzo coast); definitely hints of the pear-esque flavour associated with the pecorino grape, but this was also felt by some in our group to be a tad too smooth & light so perhaps should not be served too cold to avoid diminishing the delicateness of flavour…

Their other staple wines (Trebì and Modà) are also definitely worth checking out, and a league beyond many you will see in the shops, and the perfect accompaniment to many favourite Italian classics, pizzas, pasta, pecorino cheese and beyond.

Another aspect of Talamonti we feel we should mention is the effort and creativity that has gone into their design & branding. Even outside the context of Abruzzo, their website is fascinating and well-crafted, informative and surprising, and the printed material available also shows a flair for the aesthetic and an attention to detail often amiss! This has also been brought to bear on their bottle & label designs, which we really liked for their modernity and simplicity – the Pecorino one here is an excellent example; font, graphics & colours all representing the product well. The Rosè, Trebì and Modà wines all have a pleasing geometric vibe.

Set within the comune of Loreto Aprutino, Pescara province, Azienda Vinicola Talamonti provides visitors to the area with an excellent opportunity to see a small-scale Abruzzo wine producer in operation. Talamonti are happy to organise wine-tastings, and any interested parties should contact Antonella Di Tonno via the details below to make a reservation.